In this month’s Nature’s Craft, Tudorbeth looks at Hexennacht – the Spring Halloween – sharing spells of dragon gold for St George’s Day and spells of wonder for April’s Pink Moon 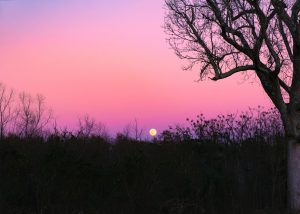 It is said that April showers bring forth May flowers. April is a wonderful, magical month for us. It is a month whose element is Air – and it’s easy to see why. The changeable nature of the weather brings gales, rainbows, showers and storms. The wind seems to blow more in April as spring blossoms create pink and white scented showers. Indeed, this month’s full moon is often called the Wind Moon, but many witches also refer to it as the Pink Moon.

This month’s festivals include April Fool’s Day, St. George’s Day, Easter, the wonderful Pink Moon, and finally, the Cherry Blossom celebrations which we see around the world at this time. However, there is also another magical festival for us and that is Hexennacht.

Hexennacht, or Witches’ Night, happens every 30 April and the celebrations continue into 1 May, which is May Day and Beltane. However, Hexennacht is also called Walpurgis night, the feast of Saint Walpurga. Yet this particular night was celebrated long before Christianity and is often referred to as the Spring Halloween. And just like Halloween, it is full of fun and partying. So, dress up and embrace your inner witch.

Hexennacht is a German term but its origins are actually Celtic – and even today there are parts of Britain that still celebrate it, though it is now more common in Scandinavia. Our Nordic cousins really embrace it more than any other country, and to them it is not only called Witches’ Night but Walpurgis Night. It is named after an 8th Century nun from Wessex, Walpurga. However, it really has nothing to do with the Saint and is a Spring festival often viewed as a springtime Halloween in Nordic countries.

Witches’ Night occurs the night before Beltane – one of the most powerful festivals of the witches’ year. It is the fire festival and a time when the Goddess has returned completely. Bonfires are lit and great rejoicing occurs as we welcome the Goddess of the Spring and Summer back into the world. In next month’s column,we will discover more about Beltane.

We sing and dance to ensure a good harvest and we also embrace the powerful energies that surround us this night. It is often called the Fertility Spring Festival – and for good reason with so many couples getting married at this time of year. A remnant of this can be seen in the Morris Men and May Poles we see on May Day, which is the following day. At Halloween, the Goddess begins to retreat from the earth and the harvest and bounty disappears, but on Witches’ Night, we welcome the Goddess back with open arms and gifts of love, light, and laughter.

There are a number of ways to celebrate this festival and the best way is to think of it as the Spring Halloween. If you can, light a bonfire. In Scandinavia, bonfires are lit and parties are held on this night to chase away evil. Many people make noise too, and there are also trick-or-treat antics with people wearing masks and costumes. In Lincolnshire, we hang cowslips on doors and windows to ward off evil.

Walpurgis Night is traditionally regarded as one of the most powerful times of the year for ghosts, demons and all manner of scary beings. So, make the most of this night and go on a ghost hunt. You could also try your hand at scrying – seeing the future by looking into the flames of a burning candle and watching as images form in your mind’s eye.

I think one of the best ways is to have a midnight picnic. Many people have a party and enjoy being outdoors on this night. They drink sparkling wine, embrace the cool spring night air and raise their glass to the Goddess. So, grab the prosecco and embrace the night – and, in this time of Covid, being outdoors is best. Be sure to practice social distancing – and make sure you wear a jumper as the April night can be rather refreshing, to say the least.

As Hexennacht is literally translated as Witches’ Night, it’s all about magic and witches. As part of our celebrations, we remember those who have passed into the Summerlands – our heaven – for being deemed a witch. In other words, those poor souls who were tortured and accused of witchcraft. One of the most famous, of course, is Anne Boleyn.

The famous and notorious wife of Henry VIII, Anne Boleyn was declared a witch – amongst other crimes including adultery and incest (allegedly) – and beheaded on 19 May 1536. Furthermore, she is probably one of the most well-travelled ghosts in British history as she is said to haunt at least seven locations around England. Apparitions of her have ranged from a headless woman holding her head under her arm in places such as The Tower of London, her place of execution, to roaming the halls of Windsor Castle. However, she is also said to haunt her family’s estate at Hever Castle.

Another famous witch was Petronilla de Meath. Petronilla de Meath was the first woman to be tried and burned in Ireland for witchcraft. Hers is a mysterious tale of innocence and loyalty. She was loyal to her mistress Alice Kyteler, who was the true and intended target of the charges as a powerful woman of nobility, but her stepchildren viewed her as a threat to their inheritance. After Petronilla was killed, her daughter Sarah was brought up by Lady Alice. However, it is said that the inn that Petronilla worked in, now called Kyteler’s Inn, is haunted by the ghostly and forlorn figure of Petronilla, who appears to weary travellers wanting to impart the truth upon them.

Finally, the Witches of Pendle Hill is one of the most famous witches’ tales in the UK. The tale of the witches of Pendle Hill is a perfect story for long winter nights full of intrigue, mystery and magic. It involves twelve women who were accused of murdering ten people in the town and surrounding area in Lancashire. The twelve were made up mainly of the Demdike and Chattox families, who were both headed by old widows with a reputation for being witches. The women were tried and held at Lancaster Prison where one died. At the 16th century church, St. Mary’s at Newchurch in Pendle, there is a tombstone known as the Witches Grave and the Eye of God where it is said that Chattox was alleged to have collected skulls and teeth. The surrounding area of Pendle Hill is also said to be a hive of paranormal activity ranging from ghosts, apparitions, phantoms and even UFO sightings.

So, enjoy Hexennacht and remember those that have passed into Spirit for being condemned as witches. Leave a cup full for them on your table or altar, inside or out in the garden.

The story of George and the Dragon is an ancient tale of a long-lost time. Legend tells us that dragons loved two things – virgins and gold. They loved gold as much as the next King and would hoard their gold in great caves and caverns – and woe betide the brave but annoying knight who ventured nearby to steal it!

St George’s Day on 24 April is a good day to channel the energy of dragons into our money and possessions. Burn a red candle and have a piece of obsidian nearby – which some people still call dragon stone as it was forged in volcanoes. Another stone of the dragon is that of septarain which has the appearance of scales.

With the piece of obsidian or septarain near the candle, say the words:

I embrace the dragon spirit of old.
Let me feel the touch of gold.
Upon this night grant three times three.
Golden wonder come to me.

If the flames flicker they have heard your request. Do not be frightened, just embrace their magic. Keep the piece of obsidian or septarain in your purse or wallet.

The glorious pink moon that occurs in April is one of hope and innocence. At times we need to see with a child’s innocent eyes all the wonder of this world. Therefore, become innocent again and see the magic all around you, realising how lucky you are no matter how little you may have.

On the night of the pink moon, go outside and say this spell with your arms outstretched in the shape of the letter Y:

I look around and what do I see?
Love and health of friends and family.
I look at life with innocence and wonder.
And see magic here, there and yonder.

Let the moon fill you with innocence once again, and look around at all you see with wonder and appreciation.

I hope you have enjoyed this month’s column, and next month, I shall be back to explore May and Beltane festivals, complete with a number of passion and fertility spells.

In the meantime, stay safe and blessed be. 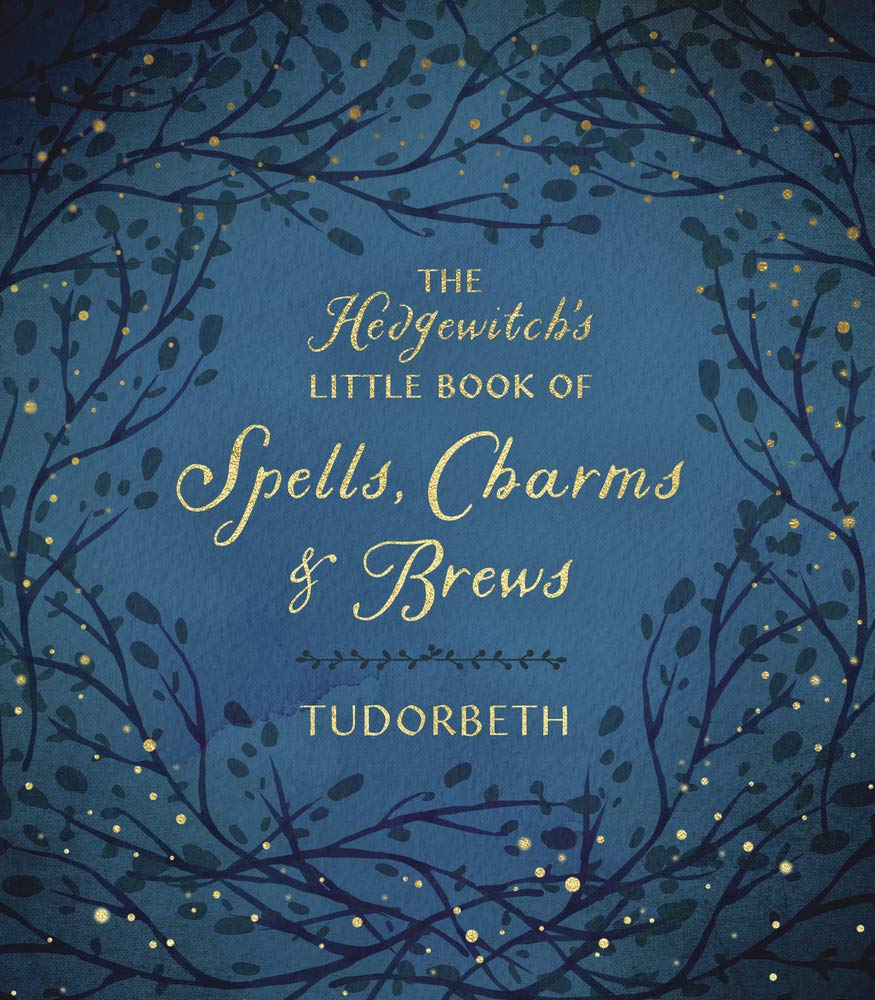 Tudorbeth has been a practicing Hedgewitch for over 30 years and is the writer of over 40 books on witchcraft. Her latest is The Hedgewitch’s Little Book of Spells, Charms & Brews (£12.72/$16.99, Llewellyn Publishers), available from 8 June 2021.

Nature’s Craft: Spells and Symbols for the Month of Opportunity