Sky Nelson-Isaacs, Theoretical Physicist and Author, reveals the wholeness inherent in nature, society and ourselves in this extract from his new book, Leap to Wholeness (North Atlantic Books) 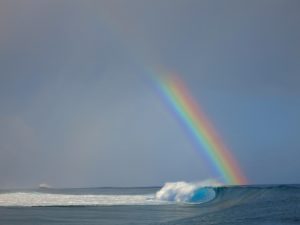 How do you get something out of nothing? This question is fundamental to our worldview in both science and religion. It led to the theory of the Big Bang, in which the whole of the physical universe, including space and time themselves, erupted into being.

The same view is present in the creation story of the Old Testament, where God created the universe out of the Void.

I wonder if this question is sticky in our minds because it reflects our basic fears. We go to work each day because, if we don’t, we would likely run out of money and lose our home. We buy a house for ourselves because, if we don’t, we may not have a safe location to sleep at night. We fight for our constitution because, if we don’t, our rights may be taken away. Is your mental picture of the world that of an empty stage on which is placed the scenery of life? That’s certainly what I’ve absorbed from my culture, and it seems like the essence of the Big Bang and the Biblical creation story.

But is this the only question we could ask? Although the answers to how the Big Bang occurred and how God created the world are quite different, in both traditions the question itself seems agreed upon: “How do we get something out of nothing?”

Granted, there are other cosmological theories in physics that do not involve creating something out of nothing. For instance, the “steady- state” theory—in which the universe expands in size but matter is continually created in the empty space, leading to an eternal universe—was considered before the Big Bang theory gained popularity. The Big Bang is a theory based on significant evidence. It is not my interest to question the theory. It is my interest to question the question.

As a young physics student at the University of California, Berkeley, I was consumed by a different story. I had the chance to create a hologram in a lab and smile with glee as my lab partner and I witnessed an ethereal three-dimensional image of a rubber duck appear in ghostly red laser light on a photographic plate. In my spare time I learned to write programs in C++ in order to play around with Fourier transforms and fractals. These are mathematical techniques for finding or generating patterns such as trees, clouds, or music, and they are the mathematics behind holograms. I had also read The Holographic Universe by Michael Talbot and other books like it. Looking back on all of these, I detect a common theme: wholeness.

When we form a mental image of our surroundings as if it is an empty stage onto which players are inserted, we are thinking as reductionists. In other words, big things are made from little things. The Big Bang answers the question “Where did all the little things come from?” But in my explorations in college I was seeing examples of things that existed “as-a-whole.”* * By the phrase “as-a-whole,” I am emphasizing that there is something essential about it that can only be understood when taking the whole object into consideration—the hyphens help make this point!

Cutting a hologram in half is like closing window blinds halfway. You can still see what is behind the blinds if you shift your perspective to the side and look at a different angle. Similarly, if you shift your view on a hologram, it moves across the page like the view through the window. The image exists as-a-whole encoded into the film.

A rainbow seems to demonstrate this wholeness as well. A rainbow is not a thing “out there” in the air. A rainbow is an optical image that captures the geometric relationship between you, the rain, and the Sun. Nobody but you will see the same rainbow, and as you move, so will the rainbow. A rainbow is not holographic, but it demonstrates some mysterious properties of light that caught my attention at an early age.

This doesn’t mean the electron can be in two places at once. It means that both possibilities can coexist up until the moment you want a real answer. What happens to the possibilities that aren’t chosen? We can’t say. It’s a poorly defined question in physics, sort of like “What was there before time?” It is known as collapse, in the same sense that picking the winner of a raffle is a collapse of all the possibilities. All the tickets are thrown away except one.

When considering this aspect of quantum mechanics, as well as the examples of holograms, fractals, and light that so intrigued me in school, I began to wonder if there might be another way to ask the question that led to a different but equally valid answer?

“How do we get something from everything?”
This was the question that came to me. Collapse of the wavefunction is a description of how we start with an entire tree of possibilities but only measure one actual result. A hologram holds visual information about an image as it could be seen from every possible angle, yet when we look at a specific angle we get a specific view. When we look at clouds, we see white because all the colors are mixed together, but when a rainbow is there we can see the colors separated from each other. If I look at a part of the rainbow that is red, it is red precisely because yellow, green, and blue are missing from that spot of sky. By default I should see white—every color—but the beauty comes from the limitations. All of these things are interesting because of what has been taken away from the wholeness, not because of what has been added to nothingness.

If the assumption that the world came out of nothing reflected a basic human fear of death and starving, what worldview would this other question lead to? If I see my education and career as “selecting between possibilities” rather than trying to “fill a bucket,” would this change my mindset? What about my relationships? At the key tipping point of an important conversation, would it help to realize that there are many branches representing the outcomes of the conversation? Then my job is more like “finding my way” to a good outcome, rather than struggling to say the right thing at the right time.

The shift to the question “How do we get something from everything?” is a shift from control-mindset to flow-mindset. Our emotions are powerful influences on our behaviour and often lead us into arguments and conflict when we can’t manage them. If I ask myself “How do I get something from everything?” within a tense interaction, I find myself navigating it differently. I find myself focused on adapting to the flow of the situation, chiselling away what is unnecessary to find the solution that already exists.

Ultimately, seeing the cosmos as fundamentally whole seems to me a fundamental shift in human awareness. It is a step into personal wholeness as we discover how the filters we use obscure our hidden qualities. How did I become who I am out of all the possible people I could have been? How do my interpretations and filters limit the accuracy of my perceptions?

It is also a step away from isolation and into wholeness as a community. How do my inaccurate perceptions limit the potential for intimacy, vulnerability, and authenticity? As I’ve begun to learn about the filters I see the world through, I’ve gained more influence over how my life goes, even while relaxing control.

From Leap to Wholeness: How the World Is Programmed to Help Us Grow, Heal, and Adapt by Sky Nelson-Isaacs, published by North Atlantic Books, copyright © 2021. Reprinted by permission of publisher.

SKY NELSON-ISAACS is a physics educator, speaker, author, and musician. He has a masters degree in physics from San Francisco State University, with a thesis in String Theory, and a BS in physics from UC Berkeley. Nelson-Isaacs has dedicated his life to finding his own sense of purpose, beginning as a student of the Yogic master Sri Swami Satchidananda when he was less than five years old. His writing on topics like flow comes from integrating this experience into his life. He brings together the connection between synchronicity, physics, and real life using research and original ideas. As an active researcher in quantum foundations, his research is supported through grant funding from a private foundation. An educator with nine years of classroom experience, with experience in industry as a software engineer, Nelson-Isaacs is also a multi-instrumentalist and professional performer of award-winning original musical compositions.