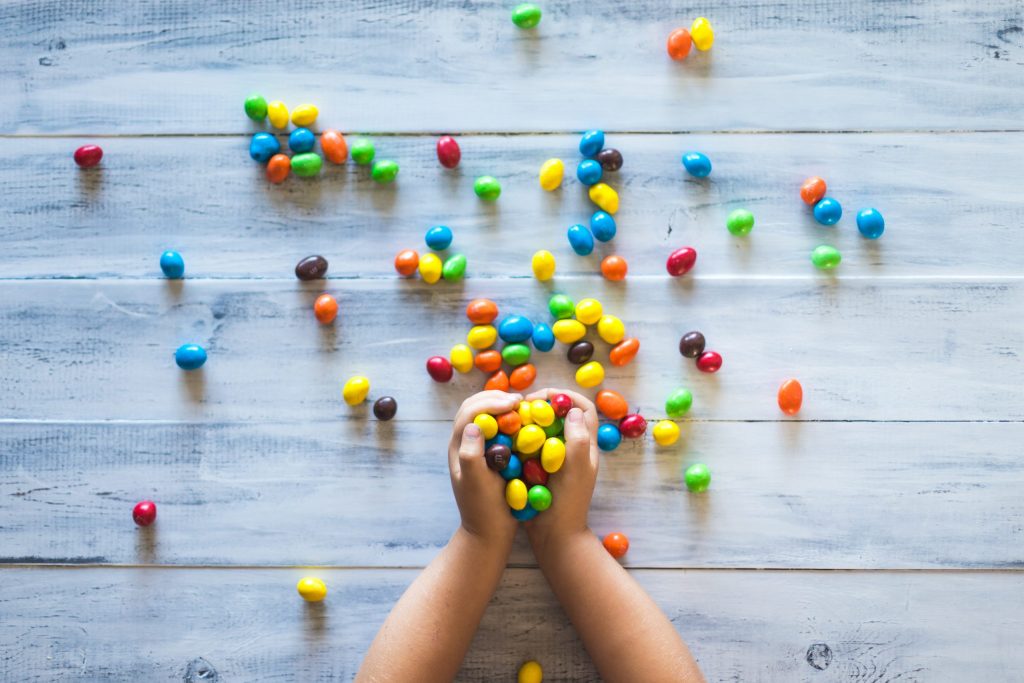 Eating too much sugar contributes to diabetes, heart disease, strokes and hypertension, even some cancers. Not to mention depression and dementia.

In the news, campaigners regularly complain about sugar and obesity, celebrities promote the latest anti-sugar fad-diets and scientists publish research about sugar-related illness or mortality. Self-help expert and hypnotherapist, Paul McKenna, has even written a whole book on how to get us off sugar, in his opinion, before it kills us.

McKenna thinks that products containing sugar should carry a public health warning. Dr Ronald Ruden, nutritionist and co-originator of the Havening Techniques, calls sugar the most dangerous drug in the world. As addictive as cocaine according to a 2017 study from Saint Luke’s Mid America Heart Institute in Kansas. Yet despite all this, sugar is still in almost everything we eat and drink – from baked beans and pizza to beer and cereal.

In McKenna’s book, Get Control of Sugar Now, he explains that food containing sugar stimulates dopamine when we eat it. That’s the chemical that provides us with the feeling of enjoyment, reward and pleasure. He goes on to say that if we eat lots of sugary foods regularly and continually, the brain eventually reduces the number of dopamine receptors, so we need to eat more sugar to get the same hit. Also, because less dopamine is released, the craving remains even after the sugar hit. Hence the comparison to addictive drugs.

Because of this, if we want to deal with sugar cravings, without resorting to artificial sweeteners (which are actually even worse for us), we first need to understand the different ways in which sugar interacts with our bodies and their internal processes.

In his book, McKenna argues that sugar corrupts our appetite, so we can’t tell when we’re full, which is the body’s natural way of regulating what we eat. He explains that hormones released during digestion tell our brains when we’re full. However, when our liver is processing too much fructose, from sugar, it doesn’t trigger the hormones that send this message to the brain. When we regularly consume too much sugar, the brain can stop recognising the fullness signals altogether, whatever food we eat. Driven for more and more sugar by dopamine cravings, we can also lose the ability to tell when we’re actually hungry and need nourishment.

Other experts agree that sugar interacts with our bodies in ways that make us feel initially good, but in the long term, are bad for us.

Naturopath Ron Prescott says that sugar enables the amino acid tryptophan to cross the blood brain barrier easily, where it converts to serotonin to give the comfort feeling. Lakis Chrysanthou, a homeopath psychotherapist and esoteric healer, adds: ‘Sugar stimulates the adrenal gland, which signals to our liver to release more sugar into the bloodstream. At first, we feel euphoric, like we have more energy, more alert, more joy.’

So on a physiological level, the more sugar you eat, the more you’ll want. Makes sense, but when someone is craving something there’s normally a deeper, underlying reason.

Lakis Chrysanthou says that some people use sugary foods to balance their emotions. Particularly those who don’t love themselves or who didn’t receive enough love as a child. ‘It’s not that we shouldn’t have sugary food at all,’ he says. ‘But we need to be in charge of when we have it, and how much.’

Rose says that sugar can act like a comfort blanket, protecting us from our problems. Hypnotherapist, Julie James, adds that sugar addictions can also link back to childhood reward systems, introduced by our parents. ‘When we go through stressful events, we fall back on what we know feels good,’ she says.

Sometimes, what we know is buried even deeper in our genetic memory where, according to Ron Prescott, exists a predisposition to eat high calorie food in times of hardship or stress. ‘There would have been periods where our genetic ancestors wouldn’t have any food for a while, periods of famine, where they had to store fat,’ he says. ‘This can be triggered by risk, uncertainty, fear, or if we experience intense emotions and today, nearly all high calorie food has sugar.’

Not much we can do about that, but the emotional underpinnings of sugar cravings, are absolutely treatable.

Marcelle Rose advises that we get to know our triggers are. ‘What time of day we start craving sugar, what’s going on with us at that point, are we being affected by hormones, the environment, are we alone or with others, when the cravings kick in?’ she says.

To fight off the cravings, Ron Prescott suggests doing a simple grounding exercise – either a visualisation or take a few deep breaths, ideally outside. To actually remove them altogether, however, means addressing our internal emotional balance to uncover the underlying causes.

Lakis Chrysanthou explains that if we have a tendency to give our power away to others; over time, this affects our pancreas and therefore our solar plexus. ‘The Pancreas balances our glucose levels and if we use up pancreatic energy too quickly, we get stressed out,’ he says. ‘Retrieving the power that’s given away to others helps build up reserves in the pancreas.’

To do this means working with our subconscious mind. ‘Our fears, anxieties and phobias are automatic processes controlled by the subconscious and difficult to override, just by making a conscious decision,’ Julie James says.

She adds, however, that the subconscious can be reprogrammed. ‘Under hypnosis, we can go back to the emotional event responsible for the trauma, usually from childhood, and change our response; look at the situation from a more resourceful adult’s point of view; do something that will not just make us feel better in the moment, but something that also contributes to our general health and wellbeing.’

Clearing the emotions is crucial, then. But years of over-eating sugary foods can create their own physical problems, which also need to be addressed to overcome cravings.

‘We also have to clean up our microbiome,’ Ron Prescott says. ‘If you’ve been eating a terrible diet for years, the microbiome has adjusted to that. Even if you stop eating sugar, those bacteria colonies are so powerful, and produce a lot of strong substances that will get you craving sugar, to the same level as cocaine or heroin.’

Prescott advises using colon cleanses and antifungal and anti-parasitic blends to clear out pathogenic organisms, before recolonising the gut with friendly bacteria, from which we get healthy cravings. Lakis Chrysanthou adds that any such blend should remove the pathogenic organisms from our system as well as kill them.

From then it’s about eating more healthily. According to Marcelle Rose that could be more protein with meals, fibre, healthy fats, wholegrain carbs with minerals such as chromium and magnesium. ‘Not too many snacks, which spike blood sugar and starving ourselves actually causes sugar cravings,’ she says.

Rose adds that if we need sugar we should go to fruit, which also provides fibre, anti-oxidants, vitamins, and crucially, with some fruit, vitamin C. This is because humans are one of the only species that don’t make their own vitamin C. We have to get it from our food.

‘We get a sweet craving when we have a lot of stress going on,’ Ron Prescott says. ‘The body is actually calling out for vitamin C because vitamin C helps with stress hormones. The craving is supposed to drive us to go for a piece of fruit, but unfortunately, in the modern day, we tend to go for a chocolate bar or a fizzy drink. We haven’t taken any vitamin C, though, so the craving doesn’t go away, it actually gets worse, as this sort of sweet food actually depletes our vitamin C levels.’

There’s one final problem to overcome, in trying to deal with sugar cravings. And that’s the cultural-economic system we live in. Just as ruthless drug barons profit from people’s addictions to drugs; so too do unscrupulous business interests seek to capitalise on our addiction to sugar.

To the money men and marketeers, sugar is the perfect, cheap, additive to encourage people to eat and pay for more food than we need. Adverts on TV, online, in magazines, all over town and city centres encourage us to eat chocolate, sweets or a fizzy drink to celebrate, to pick us up if we’re tired, or calm us down if we’re stressed.

Paul McKenna has an idea to deal with such adverts. Visualise the fit healthy, happy people you always see in them being replaced by obese individuals, who are unhappy or ill. And if that doesn’t work, we can always switch off the TV adverts, use ad blockers online and flick past adverts in magazines.

The best way to deal with such adverts and the profiteers behind them, however, is to get your internal physical and emotional bodies healthy.

Take sweetness from life, not sugar, and the programming won’t touch you. And you can still have a cream cake or chocolate bar from time to time. But you have it because you like it, not because some hidden pathogenic organism or emotional trauma is compelling you to do so.