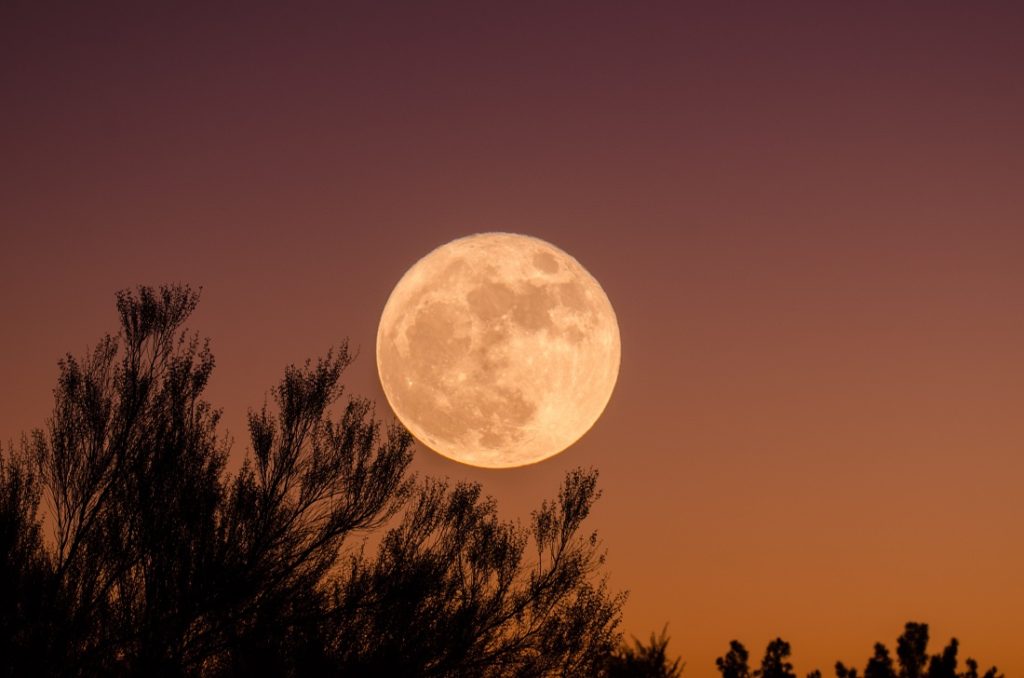 The moon is very powerful for us in witchcraft as all the planets are, but the moon holds a tender place for us. She is always referred to in the female gender and she is held in very high regard. There are some branches of the Craft who believe they are descended from her, especially when she is in her goddess form of Diana.

The power of the moon cannot be overstated – its beauty, its majesty. It pulls the tides and our emotional oceans. ‘Once in a blue moon’ means a very rare occurrence; there is a blue moon every two or three years, though occasionally you will have two in one year. Here is a list of dates for upcoming blue moons:

The New Year’s Eve blue moon in 2028 will coincide with a total lunar eclipse, making this a very auspicious month in particular; I wonder what we shall be doing then? Nevertheless, this Halloween falls on a blue moon so there will be a lot of salt making and a lot of spell crafting doing on that day methinks – lots of great energy in the air.

When a blue moon happens, because it is such a rare occurrence, needless to say it is a very powerful month. Making your magic blue moon salt becomes all the more important. A year with two blue moons is especially rare, it happens only about four times a century. The last time was in 1999 and before that was in 1961. There are many reasons why it is called a blue moon and all are varied to say the least.

At times, the moon does look blue, and after the volcanic eruption of Krakatoa in 1883, the dust particles caused the moon to appear blue for two years.

A blue moon is the second full in a month, so make hay while the blue moon shines.

The pink full moon occurs round the month of April and is called that because of wild ground phlox which is one of the first flowers of spring to appear. However, there are other times of the year when a pink moon or super moon occurs and is usually round the times of the equinoxes in either September or March. Further it also happens during an eclipse which creates an amazing effect.

The moon is powerful enough in its own right but when extra celestial events happen these triggers greater power and potency to our spells and magic. The pink moon is perfect for love and sex magic.

Tap into this magnificent moon energy by creating these spells.

Pink moon salt is perfect for all spells regarding love and sex. The pink moon’s heightened power gives an extra boost to the salt and increases its potency.

On the night of the full moon, place Himalayan pink salt into a bowl and leave on a window ledge. Hold your hands up in the air and as you do say these words:

Blessed moon on this night.
Bless this salt with your light.

Leave the salt in view of the moon’s rays all night and in the morning put the salt in an air tight container like a cleaned jam jar. Place a pink ribbon round it.

You can now use this salt for all magical purposes, from magical bath salts to cooking. Use the salt in your meals for an aphrodisiac kick in your food.

The full moon herself has many stories connected to her and the names of each one should be used, for example when spell-weaving at that time.

Just as with everything in the Craft, all things are interwoven including the stages of the moon. Many spell-weavers will make sure the moon is waxing or waning before they cast a spell. Essentially, if the moon is waxing then you are bringing something to you and if it is waning then you are sending something away from you. Waxing means to invoke; waning means to banish.

Many phones nowadays tell you when the moon is waxing or waning in the weather app they have as part of their set-up.

When casting spells and using your practical magical please always be aware of what the moon is doing, and try not to use magic or cast any spells during an eclipse.

Some practitioners might argue with this, but I do think that eclipses are pretty negative and have a manner of doom and gloom around them. At the end of the day, it is up to you.

You could do an experiment; in your Book of Shadows write when the next eclipse will be and for a week prior and week after the eclipse, including the day itself, keep a record of what happens in the world, in your life, in your work, in your relationships. See what happens to the weather, to politics, to countries, to celebrities, lives and deaths. Then come to your own decision regarding eclipses, don’t just take my word for it.

To counteract the negative effect of eclipses I have created a candle for them.

It is an indigo, almost black, candle so that all the negativity from the eclipse would go into the light of the flame.

The oil I use for this candle is opium. Yet even though there may be negativity around concerning the night sky and the moon, it is still a part of us, a part of the Craft, and therefore must also be acknowledge and respected.

You might find from your own research that it is all good at eclipse time; if this is the case, write down what type of an eclipse it was, lunar or solar, what time and day it occurred and the other correspondences.

As all are interwoven there may have been other factors involved in the positive eclipse. But you will now be beginning to listen and be aware of the world around you.

Blessed be and next month we will look at the power of the Sun and its magical influence within witchcraft.

Nature’s Craft: The Wheel of the Year – A Witch’s Calendar