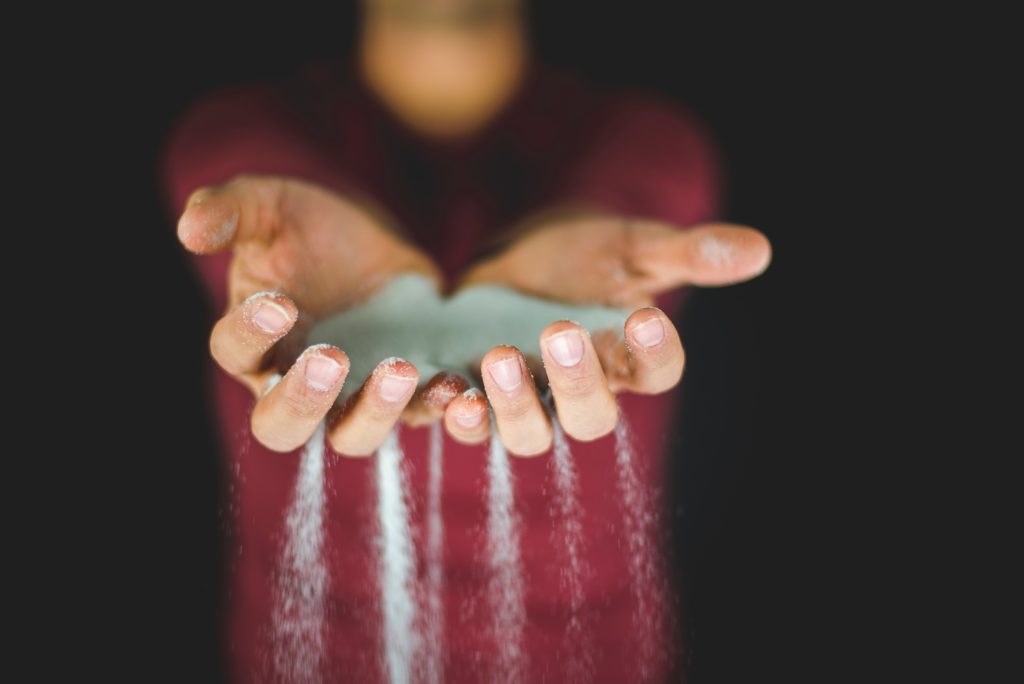 Hello, and welcome back! In this article we are going to delve into the world of protection. When we work in magic – indeed even when we go about our daily chores – we all have some form of protection. We have car, house and life insurance; when we drive, we put our seat belts on. Working within the spiritual realm requires nothing less.

There are many forms of protection when working specifically within nature and the Craft itself. We are going to look at two in particular – and you might be surprised as you probably already have them in your kitchen.

The most powerful resource we can have in this world for protection is salt. It embodies all of the elements of nature. It can come from the sea or from mines deep within the earth; it is therefore both of earth and of water. It is dried by the wind and is therefore also of the air. Put a couple of grains of salt on your tongue and taste it in its purity; it is sharp, it burns: it is also of fire. Salt is an embodiment of all the natural elements we recognise. It can heal, and too much can kill; it is both a commodity and a necessity. Do not underestimate its power of good and its ability to do good.

There are many different types of salt, from pink Himalayan salt to the black lava salt of Hawaii and other volcanically-occurring salts, which because of their varying colours can be used in corresponding magical practices. For example, black salt is one of the magical key ingredients we witches cannot be without. It gets rid of negativity and dangerous people, and when used with traditional white salt it harmonizes the atmosphere and balances the equilibrium of life.

Salt is a manifestation of the earth. It cleanses harmful or negative energies, and when salt is mixed with water it produces holy water that can be used in your rituals

When salt has been infused with the power of the full moon, a blue moon or the sun, it is particularly powerful becomes and our greatest weapon against harmful energies. We call this magic salt. Always have plenty of magic salt handy as it can be used in all manner of spells, rituals, festivals and celebrations from cleansing, purifying, protection and warding off negative energies, including people!

Take a bowl of sea salt and put it in view of the full moon overnight. It is fine if you live in an apartment block that gets no real sunlight or moonlight. The light from the moon is still lighting up the night, so never fear – the moon’s rays will find your salt because you are asking for the power of the moon to help with your magical work. Put your bowl of sea salt on the window ledge on the night of a full moon.

Leave the bowl overnight and, in the morning, put your magic salt in an airtight glass jar (like a clean jam jar) and tie a white ribbon round it. This is your classic full moon salt, and you have twelve chances to make it throughout the year.

However, our natural world is magnificent and sometimes we are graced with a blue moon. A blue moon occurs when there are two full moons in any one month, which happens roughly every two to three years. However, there is on occasion a very rare event in which there are two blue moons occurring in one year, though this only happens only four times in a century, with the next due in 2037.

Nevertheless, if you manage to get a blue moon, then do exactly the same thing except tie a blue ribbon round the jar at the end. Blue moon magic salt is excellent for healing spells and wisdom magic.

If you want to use the sun, the best time is the summer solstice. Once again, put your sea salt into a bowl, place it in view of the solstice sun and leave it for about three hours on that day, 21st June. Afterwards, carefully pour the salt into a clean jam jar and tie a yellow ribbon round it. Sun magic salt is perfect for career, luck, creativity, law and finance spells.

Throughout the course of the year you will need this powerful salt for all kinds of different things, and you may actually run out of it. With the moon magic salt, you know you can always make some more every month, but the summer solstice only comes once a year (a blue moon is rarer still).

Many practitioners use the magic salt to cast a protective circle when performing ritual, Esbat for general spell-weaving, or in healing circles. Protection is a very important part of working within nature, as our world is one of duality. Just as there are positive forces there are also negative ones, so magic salt becomes a very valuable resource.

Taking your magic salt, fill a clean spray bottle (plastic will do) with water and add three tablespoons of your salt to it. Shake up the bottle with the water and salt. You have now just made holy water. Keep it handy or perhaps put it in your Craft cupboard to keep it separate from everyday things. This water can now be used for many things.

You can consecrate your home by spraying it around your house. Start at the doors and windows. Imagine sealing your house or room with light power, the white-hot power of strength and goodness. All negative energies and forces that would want to cause you harm are now keep outside and cannot come through your fortress. Your house is now sealed. Try to do this once a month, perhaps at a new moon. When beginning a ritual, you can spray the holy water over yourself like a perfume for a spiritual cleansing, as it were, in case anything negative from the day has attached itself.

Using your classic magic salt, sun magic salt, or blue moon magic salt, make up a small, dark bottle of it with water and a corresponding essential oil, using equal amounts of all three. For example, three drops of lavender oil, with three pinches of magic salt, in a 50ml dark glass container of water. Put the lid/stopper and shake vigorously for 12 second. Keep in your bathroom and use in your shower gel, bath, or shampoo whenever you feel the need for an extra boost of magic.

Not Just a Star

The other powerful resource we have for protection is the pentagram, or five-pointed star. The pentagram is one of the most sacred symbols within nature and is found everywhere throughout the universe. Many witches have it permanently tattooed on their bodies, as it is the most powerful symbol of protection ever used.

This symbol echoes the nature we are all born from. Always make sure the pentacle is pointing upwards, as this is the symbol of light and love – if the pentagram is pointing downwards, it is the opposite of what we adhere to. Each point on the pentagram represents nature and the elements once again: earth, air, fire and water. The fifth point is spirit, and this crowns us all.

Always try to have a pentagram in some form within your house but don’t worry if you can’t find one, if you have a bowl of apples then you have the pentagram. Why? Well, slice an apple in two, and there you will find the pentagram. Apples are also the fruit of knowledge. There are so many legends connected to apples, from Eve and the Garden of Eden to the golden apples of Hera.

If you would like to try a money spell using your protective resources, then try this quick and easy one. Using a green apple, slice into thin layers and leave to dry for a couple of days. Sprinkle some of your magic salt over them saying, ‘Money, money, money, come to me. And it harm none, so mote it be.’ After a couple of days, the slices will begin to go brown and leathery, pop one in your purse or wallet to bring money to you.