Food straight from the streets of India brought to you by Nisha Katona, the founder of Mowgli Street Food restaurants… 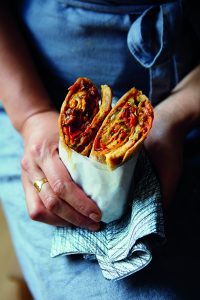 Wow, the power of social media cannot be understated. Nor can its absolute usefulness in being able to turn a business like Mowgli around on a dime. The omelette wrap is a very common Indian meal. We have it at breakfast, lunch, dinner or supper. It is a delicious, oozing dish, but it sold terribly. I put the question out on Facebook as to why it was unpopular – had it been flavour, I would have pulled it off the menu. The feedback was instant. No-one in England wants to go to a restaurant and order a dish with the word ‘omlette’ in it. Overnight it became the Mowgli masala wrap and the sales trebled. This is one of our staff favourites. 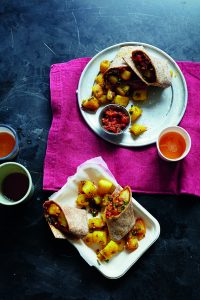 Indians who live across the world cannot help but pimp local dishes to make them taste more Indian. Spice is a drug for us. We can go a couple of days on bangers and mash but then we start to sneak adulterants into our grub to get that spice hit. Whenever we brought chips into our home, if we turned our back on them, my mother would have done this chip butty thing to them. This involved red onion, green chilli and a hot pickle in a roti wrap. It drove me and my brother mad, but we loved it. This is one of our big sellers, so well done Maa. 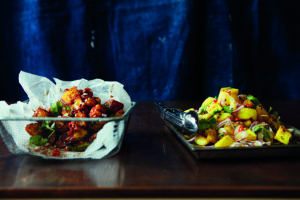 I eat in Mowgli twice a day. I am forever in the kitchen looking at new permutations and combinations of what lies within to perk up my lunch. I found myself often going in to chat to the chefs, dipping the Fenugreek Kissed Fries into the sauce of the Tamarind Treacle Ribs. This is how this dish evolved, from my hungry childlike meddlings around the Mowgli hobs. These fries are sweet, you don’t need many, but there is something so wrong yet so right about them. And I bet they are the only Treacle Tamarind Fries on the planet.

No Indian would fry potatoes without first rubbing them with turmeric. Turmeric is a deep earthy flavoured root, ground to make a golden yellow powder. This spice adds to the earthiness of potatoes, which makes them taste sweeter and richer. I add fenugreek as it lifts them to another spicy level. This is how I cook my roast potatoes at home too, but with a sprinkling of brown sugar and garlic purée. 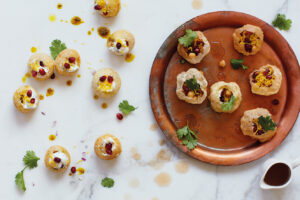 Known in India as Dahi Puri, these are the ultimate flavour grenade and our

biggest seller by far at Mowgli. They have their own Twitter following and fan club. Introducing someone to their first chat bomb became something of a cult culinary practice in Liverpool. They are the fiddliest things on earth and only last about 5 minutes before turning limp and falling apart, so Mowgli has a dedicated chat chef who makes each one to order and sends them straight out. The pani puri are the trickiest part of creating the chat bomb. The casing is made of simple ingredients, but the devil is in the detail. The dough has to be exactly the right density and needs to be dry enough to form a tight, waterproof final fry. This is why Indians do not make these at home and instead street vendors become dedicated puri makers, making nothing else.

For the Tamarind Water:

For the Pani Puri 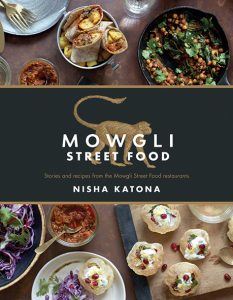