In this Q&A, we caught up with Karen Kay, founder of the Three Wishes Fairy Festival all about this year’s event. As we sit down with Karen, she updates us on the latest including dealing with a broken wrist while trying to plan out her festival. 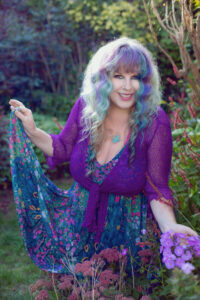 1. Tell us a bit about the Fairy Festival and how it came about. You said that you first saw fairies when you were a little girl. Could you describe what that was like?

I would leave out bottles of rose water overnight for the fairies and I’d go and check in the next day and it would always be gone. You could say well it evaporated but I knew that the fairies took it and that was my first experience with fairies. I would also see them as tiny little lights out of the corner of my eyes. I knew that I was interacting with other beings and that they were fairies. Those interactions stayed with me through until now.

In 2006 I heard them. We all know the sound of our inner dialogue voice but this was different. This came with a feeling and it sounded different. They said ‘You must organise a fairy festival in mid summer in Cornwall. There’d never been a fairy festival in the UK when that message came through. I had previously done MBS type events for charity or to raise money for my son’s playgroup since 1995 and I’d developed a good reputation. They told me to announce it and trust. I thought about it for a few minutes and then decided to go with it and see where it took me. I announced it, a metaphorical fairy door opened and I ended up being introduced to somebody who owned a bit of land in Cornwall which was already set up for a festival. That man is my festival site manager to this day.

The name, Three Wishes Festival, came about  one day when I was in the garden hanging out my laundry. My grass had been cut and I noticed a single dandelion seed head and I remember thinking how is that there after the grass has been cut? I carried on hanging up the washing and one of the wishes flew past me, and then another and then a third. I thought ‘three wishes’? It was a magical moment and I knew that that was what the festival would be called.

2. How does it feel to be returning this year after 2 years away due to the pandemic?

I’m really happy to be returning because it has been a challenging couple of years for everybody. It showed me how much the festival means to me. We call it a fairy family, it’s not cliquey, everybody is welcome. Everyone is coming in this year excited to gather again and celebrate the fairies in the location of Mount Edgcumbe Country Park which is in an area of outstanding beauty as well. It’s going to be a really magical event, I just know it.

3. One of the highlights will be the mermaid lagoon, tell us about that!

That is going to be really beautiful and enchanting. Mermaids are elemental beings too. Fairies are guardians of the land and mermaids are guardians of the oceans. When the mermaids come in, they always come in with this extra touch of magic. There’s this beautiful lagoon and there will be mermaids in there answering questions, talking to people and splashing around. I defy anyone to not be enchanted by the mermaids in the lagoon.

4. What is your favourite part of the festival/what do you look forward to most?

Well the mermaids are a highlight of my festival because I see myself as a mixture of fairy, mermaid and humans. That’s why I choose to live in Cornwall because I have access to the ocean and access to the woodlands and greenery. It’s really hard to choose one highlight because there will be so many things going on at the festival. One year someone came dressed as a tree end from the Lord of the Rings! What I do every year is have daily themes. On the Friday it will be flower fairies, on Saturday it will be elves and on Sunday it will be SteamPunk and Mushroom fairies and I’m especially excited about the Mushroom fairies. If you have a look at #MushroomCore on TikTok or Instagram you will see lots of images of men and women dressed up as toadstools and mushrooms. That is a highlight I am really looking forward to.

5. Is there anything new to the festival this year that hasn’t occurred before?

6. What was the motivation behind choosing vegan only food for the festival?

The festival, since 2006 has always been vegetarian and a few years ago I made the decision to make it vegan only food and the reason for that is because I love animals and I am personally a vegan for the animals and my health. I thought, for three days, people can survive off vegan food. In the past I’ve had people on a carnivorous diet and they’ve said that since the festival they’ve turned to a plant-based diet because they didn’t realise the variety of delicious food there is. It’s not about lecturing people but about gently educating them that there are other options and also in the climate of today, it’s very environmentally friendly to eat vegan food.

7. Where can readers find out more about the festival?