Author of Zen and the Art of Dealing with Difficult People, Mark Westmoquette shares how you can practise zen techniques when dealing with uncomfortable situations

In Zen we have the concept of a ‘troublesome buddha’. The word ‘buddha’ here isn’t referring to the Buddha, but to a buddha – a teacher. A troublesome teacher can be anyone who frustrates you, pushes your buttons, is irritating, abusive or difficult in some way. Gosh – I hear you exclaim – what could we learn from those people… except perhaps how not to behave? But that is precisely what this phrase invites us to consider. How could that person who thoughtlessly and painfully crashes their trolley into your elbow at the supermarket really be a buddha?

For many of us, the merriments of the festive season come hand-in-hand with having to spend time with some of the most troublesome people in our lives – our extended family. Perhaps the COVID restrictions have meant you mercifully didn’t get subjected to the same old tirade from your uncle about ‘the state of the world’ this Christmas. But equally, perhaps the lack of all those extra family members meant you had a few undiluted days with just your parents or siblings (who, I should say, likely have a special talent at finding, and repeatedly pressing, your buttons). Or, perhaps, you got angry with the traffic on Boxing Day, the politicians on TV, your line manager who went off with COVID at just the wrong time, or any number of people in your life who drive you up the wall.

What we find difficult about people – and how we respond to them – can often stem from old and deeply grooved patterns within our attitudes and behaviour. Make no mistake: we all have these grooves. They arise because of our past experiences and upbringing – what in Buddhism is called our past conditioning. But it’s never too late to carve new grooves and start shifting your attitude towards difficult people. We know the brain is highly plastic, meaning it can (and does) continually rewire itself, adapting to the situations and relationships we find ourselves in. Thus, we absolutely can change our behaviour, attitudes, beliefs, and actions. We can learn to respond to difficult people with more wisdom and clarity and start perceiving them in a different way (as buddhas even).

You can see that there’s often a pattern to your behaviour in relation to difficult people that causes pain. Perhaps you’ve recognised that when your uncle launches into his usual monologue, you always (metaphorically) put up your fists and try to set him straight, but that inevitably leads to raised voices and eventually total exasperation (in my book, Zen and the Art of Dealing with Difficult People, this is what I call the ‘aversion-anger’ pattern). Or you’ve noticed you tend to go quiet and hold back the rising head of steam until you find a way to excuse yourself – the ‘aversion-avoidance’ pattern.

When the emotional heat rises, it gets harder and harder to stay consciously aware of your sensations and remain able to choose how you respond. We become emotionally dysregulated. As we lose that awareness, our habitual reactions take over – we fall back into those well-trodden grooves. Maybe as your uncle settled into his chair you said to yourself ‘this year I won’t react’, but as he made his point for the third time something snapped, and the next thing you knew you were in another shouting match.

When someone does something that annoys or irritates you, one of the easiest grooves to slip into is adopting the stance of ‘I’m right and you’re wrong’ – as in, ‘you’re the problem and you’re causing me to feel this way’. The distinction between self and other becomes very stark. But the concept of the troublesome buddha invites us to entertain the possibility that that may not be the whole truth – that you may not be in the position of ‘right’, or there may not even be a ‘right’.

As I see it, there are two skills we need to develop to bring more wisdom and clarity to dealing with difficult people. The first is remaining aware of our sensations as the temperature rises. This is crucial because awareness gives us knowledge, and knowledge allows us to choose how we respond. So as your uncle rants on, you’re aware that your hackles have risen and you have a strong impulse to counterattack, to be right, to win, or you feel forced into submission or otherwise taken advantage of. These feelings are signals, and they give you the clarity from which you can choose to do something differently. The second skill is to develop a willingness to reconsider the truthfulness of the ‘I’m right and you’re wrong’ stance.

Where before, the separation between you and the troublesome person felt sharply defined, now there’s a kind of softening in that perspective – and with that comes the potential of seeing that the difficulty is in the relationship, not in the other person. That doesn’t mean it excuses their behaviour in any way, but it might allow a touch of compassion to arise. Perhaps your uncle has chronic hip pain, and copes with it by directing his frustration and anger outward towards the injustices of the world. You’re not as separate from him as it might first appear – this is called seeing his Buddha-nature.

I know no better tool for developing these skills of awareness, softening of perspective and compassion than meditation. Our sincere practice of facing ourselves without judgement on the cushion put us in an increasingly competent place to apply that practice to the thorny, maddening, infuriating and enraging relationships we find ourselves in day-to-day.

So, when you next find yourself being irritated by someone, try to: 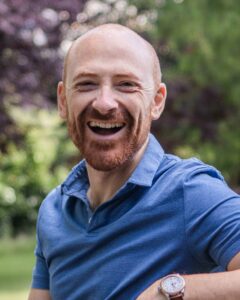 Mark Westmoquette has a PhD in astrophysics, and is an ordained Zen monk and a yoga and mindfulness teacher. In 2019, he gave up his life of teaching courses and workshops in yoga, mindfulness and Zen to move with his wife to the island of St Helena in the South Atlantic for a two-year adventure that involved writing this book.