‘Don’t jump!’ you want to shout. A thin young black man in threadbare shorts and a t-shirt plants his foot on the ledge of a cinder-block roof. Over his right shoulder he carries a long branch; suspended from the tip of this staff is a hobo’s bindle. Traditionally the bindle is a piece of cloth, tied to create a sack; this bindle is a black plastic bag.

In his right hand the young man holds a white blossom. An underfed mutt gazes upward at the young man. There’s something of the transcendent about this scruffy runt. He appears to be guarding, warning, or merely knowingly observing his human master. In the distance green mountains rise; above them hangs a placid blue sky. 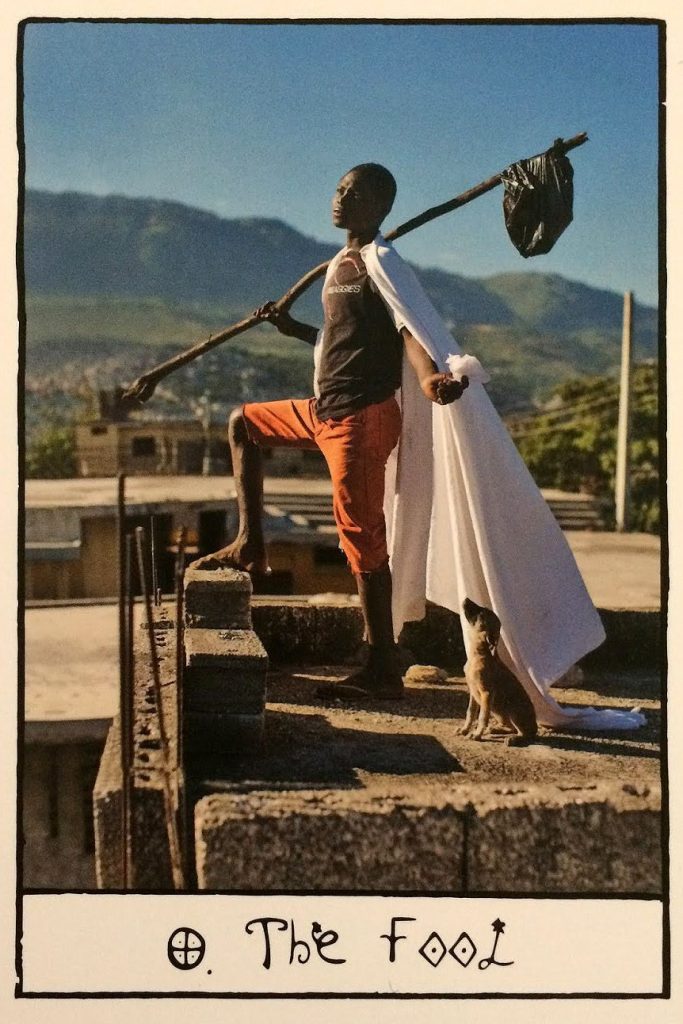 The young man’s facial expression grabs you. He focuses intensely on his goal, clear to him in his mind’s eye. He appears to be listening. One is reminded of the quote by Henry David Thoreau. ‘If a man does not keep pace with his companions, perhaps it is because he hears a different drummer. Let him step to the music which he hears, however measured or far away’. But you worry for this young man. He is, after all, standing on the ledge, like someone contemplating ending it all. And he is wearing a bed sheet around his neck as if it were a cape. Does he think he can fly? Will he crash to earth?

In fact, the lad with the intense expression is Louis Kervens, a teenager in Port-au-Prince, Haiti. He is affiliated with Atis Rezistans, a close-knit community of artists steeped in ‘junkyard make-do’ and ‘survivalist recycling’. Kervens is posing for the Fool card of Belgian photographer Alice Smeets’ Ghetto Tarot.

Smeets, winner of the 2008 Unicef Photo of the Year Award, has been visiting Haiti since 2007. The Ghetto Tarot is the fruit of her calling ‘to combine three of her passions: the spiritual world, the Haitian culture and people, and philosophical reflections about dualities, in this case, rich and poor’.

Haiti is famous for three things. In 1804, Haiti became the only nation in history established by a successful slave revolt. Haiti is the poorest country in the Western Hemisphere. Six million Haitians live on $2.41 per day (£1.77 at time of writing), or less. Haiti is also famous for Voodoo, a syncretic religion that combines Catholic imagery with African traditions.

Tarot is a deck of seventy-eight cards used for divination, reflection, and amusement. In 1909, London’s William Rider and Son published a tarot deck. Author and occultist A. E. Waite wrote the guidebook, and Pamela Colman Smith illustrated the cards. The Rider-Waite-Smith deck remains the most popular tarot deck ever created.

Smeets and her Atis Rezistans collaborators re-enact the images from the Rider-Waite-Smith deck. Smeets’ photos are all in color, and they all feature living models. The models’ costumes and props are, as per Atis Rezistans’ manifesto, created from locally available materials, including machetes, animal horns, hubcaps, and human skulls.

The Ghetto Tarot inspires me to rejoice. Though I am a devout Catholic, and don’t believe in magic, I do read cards. A reading offers the querent an opportunity to see vexing problems in a new light. Focusing on archetypal imagery rather than the all-too-often imprisoning vocabulary of written or spoken words invites the querent’s mind to explore hidden corners and new vistas, and to feel out new pathways to new solutions.

I live in a majority minority city, Paterson, NJ, and my querents are often people of color. I own several dozen tarot decks but none of them gives me what I have long dreamed of: a deck that is fully integrated in a coherent black world. The Rider-Waite-Smith deck is grounded in Medieval Europe. It is populated by kings and queens, in a landscape dotted with castles, knights, peasants and beggars. It wouldn’t make much sense to introduce non-white characters into that landscape. One of my favorite modern decks, the Book of Shadows, is set in modern America. Several cards include African American characters. The Cook’s Tarot, another favorite, includes even more African American characters. These decks are great, but the gift the Ghetto Tarot offers is really special: this is a black deck grounded in a black world. There are no white characters, and every card reflects Haiti, a very important country to the African Diaspora. Just as black people have been able to find wisdom in the all-white Rider-Waite-Smith and other all-white decks, white seekers will find all they look for in tarot in the Ghetto Tarot deck.

Tarot is at least partly an entertaining escape from the burdens of the real world, and many readers, including me, enjoy the fantasy aspects in our favorite decks. Many Tarot decks feature pristine vistas and women with hourglass figures and men with chiseled chests. But the Ghetto Tarot takes a unique approach. Most of us are not blessed with pin-up worthy bodies, and the pristine natural vistas so often encountered in tarot art are disappearing from planet earth at a tragically rapid pace. When we do manage to find an untouched Eden, we have to deal with biting insects and a distressing lack of indoor plumbing.

The Ghetto Tarot emerges from the real world of bodily imperfection and manmade pollution. Natalie Amboise in the Star card is fully nude, and her body is a lot like yours or mine, in that it’s not the body of a runway model. Just as the very real citizens of Haiti have to deal with uncollected garbage and clothes worn well past the point of being new, so do the denizens of the Ghetto Tarot. Smeets’ real-world aesthetic does not make the Ghetto Tarot any less appealing. I experience a new tarot deck similarly to how I experience a novel or a feature film. I tune in to the artistry and plumb each page, or each card. The Ghetto Tarot deck is one of the most immersive decks I’ve ever experienced.

As with a good novel or film, it really does take my mind to another world, a world I find attractive, in spite of its flaws. I feel as if I am getting to know the characters, and that intimacy helps me to build a relationship with the images that will aid contemplation.

Many little touches delight me. The Magician is wearing worn-down basketball sneakers and standing in front of a building made of corrugated tin. Anyone who has lived in the Third World as I have, will be familiar with such architecture. Amboise again, embodying Strength, cradles a plaster lion. She gazes at the cat she has tamed with a look of depthless feminine compassion. Mario Alito Denis, as Death, wears the clothing and white chalk face paint of Baron Samedi, the Voodoo loa of the dead. Some of the cards, like the two of cups, include sculptures by Atis Rezistans sculptors. A wooden sculpture of the Archangel Michael floats above two lovers; between their feet snakes a Voodoo serpent god. The five of cups, symbolizing regret, is set in a decrepit courtyard; a pile of garbage rises in the background. The queen of cups, the monarch of water, emotions, intuition and spirituality, assumes an appropriately regal air though seated in front of the mouth of a sewer.

What makes all this imagery of poverty and decay bearable? The people. Atis Rezistans artists depicted in the cards radiate a vibrant vitality that warms and electrifies the viewer. These Haitians, with their direct gaze into Smeets’ lens, invite the viewer not just into their ghetto, but into their hearts. The king of wands is seated on a dirty street, but he fixes the viewer with his eyes and communicates his humor, his wisdom, and indeed his joie de vivre. ‘Yes, I live in a slum and you are a consumer far away who could afford to buy this tarot deck. But I am just as alive as you. My dreams are just as big and vivid as yours. I love as intensely as you. Though thousands of miles apart, we are all human, and we are all in this together’. As much as I’ve loved other tarot decks, I’ve never owned one that conveyed just that message.

The four of swords traditionally depicts a knight’s tomb in a church. Over him is a stained glass window. In the Ghetto Tarot, Mario Alito Denis reclines on a shipping crate. Over him, in lieu of a stained glass window, is a folk art representation of what looks like Poland’s Black Madonna of Czestochowa. Stenciled onto the crate’s rough boards is the word ‘Fragile’. Indeed, we are. But these Haitians are also clearly insistent on survival, though life has handed them a fate much more demanding than ours. Whether you believe in magic or not, you can gain a lot from the Ghetto Tarot.

Danusha Goska is the author of Save Send Delete, a memoir about her relationship with a celebrity atheist, and God through Binoculars: A Hitchhiker at a Monastery, about birdwatching, spirituality, synchronicity, and fate.