As Art + Christianity present Fourthland’s Call to Holy Ground, we interview the artists behind this collection of video, sound and sculptural installations for church, temple and forest 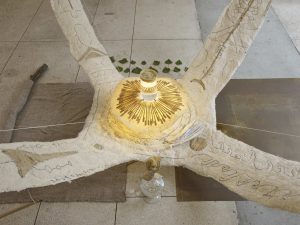 As Art + Christianity presents Fourthland’s Call to Holy Ground – a collection of video, sound and sculptural installations for church, temple and forest – can you tell us a little bit about this project, and which sacred sites were chosen and why?

The project was a moment to create a shared connection with the communities that gravitate to and worship at St Andrew’s Church and Shri Nathji Sanatan Hindu temple – weaving a story that would connect both communities more deeply with the piece of ancient woodland between them. The calling was to use the project as a route in, to consider the return to the natural world as something of the sacred. The work was made throughout 2020 from careful listening and collaboration with a group of about 40 elders. Many of the people we worked with have been living in Waltham Forest, London for over 40 years coming from a range of countries including Ireland, Mali, Kenya, Vietnam, South Africa, India, Mozambique and other parts of the UK. Others have been in the area for over three generations and together the group represented a wonderful melting pot of local histories, faiths and the notion that everyday life is a pilgrimage. Something of the essence of what London, at its best, offers: a refuge for cross-cultural connection.

We were interested in listening to stories from the elders of both communities and to use what was shared to write a collective story. What emerged from this was the story of the ‘Ground Mother’ –  a symbolic character, covered in cloths of all kinds and colours, who invites people to walk in her footsteps in order to offer a deeper connection to nature and in so doing create a new scripture of the earth. The story of the ‘Ground Mother’ forming this new experiential scripture through a constellation of rituals was then enacted for film, among the trees and waters, and the piece of ancient woodland that connects the church to the temple. Each member of the community offered a series of part-improvised, part-choreographed gestures to bring the story to life.

The story weaves many fragments and essences together creating a new connecting symbolism. Some of the reimagined fragments include the underground streams that run under St Andrew’s church built in 1886 and images from the ancient trees, some of which are 400 years old. Others allude to the vision of crows that now reside on the land of Leyton Flats opposite the temple that in the 70s was full of herds of horned cows. This link to the sacred cows in India became the deciding factor when the Hindu community chose that place to make the UK’s first large scale Hindu Temple devoted to Shri Ram and Shrinathji.

Through the project the sacred connections that reside below the surface of both sites and the collection of people from all over the world that gather there came to the fore, including the historical links to the River Lea and its Celtic symbolism, being once worshipped as the river of light, linking to the Saraswati river in India. 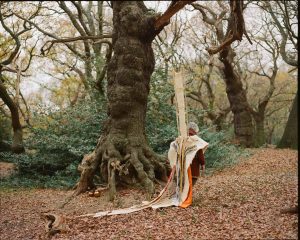 This project explores themes such as nature, sanctuary and belief. Why is the link between contemporary art, faith and nature so important, and what does Call to Holy Ground mean to you?

The exhibition presents a rich symbolism through the invitation to journey into the story of the ‘Ground Mother’ embedded with gestures and connections across nature, culture and faith, gestures that call to a holy ground that connects us more deeply with the earth. ‘Call to Holy Ground’ for us is a remembrance that we are all connected.

By combining art, faith and nature we are able to reclaim something of a sacred aesthetic – one that is not born in the mind but born as an experience of expression and relationship. These types of ‘felt’ aesthetics are vital to connect us back to the sacred origin of everyday life and how symbols and materials relate to this. As artists we have been working with the sacred for many years and the
opportunity to combine faiths through this connection, which we hold within the practice, with places of worship where the notion of the sacred is part of everyday life, has elevated these themes.
It is vital that the modern times reimagine this sacred encounter to the ecology of ourselves. Working with the notion of faith and hope for change, to call in a holy ground beneath our feet and with it a hope of a more sustainable future full of expression, enchantment and joy. 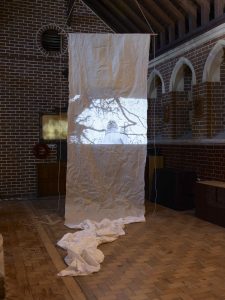 The installation was made in collaboration with women elders from the communities of St Andrew’s Church and Shri Nathji Sanatan Hindu temple in Leytonstone in north-east London, and visitors embark upon a meditative sound walk through the fringes of Epping Forest, listening to a soundwork of stories, chants, songs, and poems collected from the elders. How was this material chosen, and in what ways is this experiential installation like being on a pilgrimage?

We were inspired early on in the project by the notion that everyday life and each step we take has the power to become a pilgrimage. So we began delving into ways to make contact with this as an essence.

What came to us was how the relationship between symbols and experiences can create an imaginative bridge on which the encounter is formed. We chose to create the work in 3 parts – each an echo of the other – so that the journey between and within them generates the felt encounter or pilgrimage through the work. We invited the elders to offer songs and chants that would bring elements of this encounter to life. So the material was gathered and chosen as a result of a series of exchanges.

Incorporated into the installation are domestic items and objects collected from the forest, and a glass vessel containing water from the Rivers Ganges and Lea, inspired by ceremonial water offerings. Can you tell us a little bit about the objects that have been chosen and the significance of the sacred waters that have been used? In what ways is this project a response to the current global ecological crisis?

Objects include pieces that the elders use within their home shrines alongside vessels for storing or mixing spices and other ingredients that would be used in kitchens. It felt right to repurpose these domestic and well-used pieces into the work.

The image of sacred waters came through strongly as a symbol throughout, in the stories of the faith rituals shared and as a metaphor to capture the essence of heart connection and flow between people – being something of the sacred waters that guide us all to a place were we are all connected.

We feel that the current ecological threshold that we find ourselves in is an invitation to remember that our lives and the lives of all human and non-human life forms are not only sacred but connected. In this way, by building new connections between people, symbols and the surrounding environment, we are able to embark on practices of everyday magic that re-enchant and in so doing remember this connection.

How does this collaborative, interfaith art project aim to deepen our connection to the land and to each other, creating a collective field of trust between faiths, 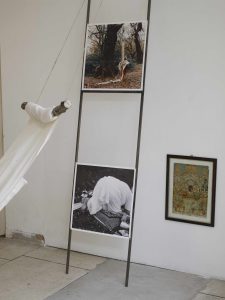 generations and cultures, and how does this installation bridge spiritual and ecological practices, ‘forming an environmental scripture’?

The three parts of the work – installation, film and sound piece – each create an echo of the project’s main themes, and through experiencing each aspect a connection is formed. By creating a new mythology between the groups – as an imaginary to connect to and have faith in – what is created becomes emergent of a new type of ritual, a ritual that doesn’t have a set way of doing
things, but a feeling of ‘doing in the intention’ that connects to the ancients in the present moment, allowing a new ritual to be formed and offered.

In this way the story of the ‘Ground Mother’ and the associated gestures builds a faith in forming an environmental scripture that is alive in the present.

We need more stories to connect us back to where we have not quite been – emergent of the present, and in connection with the sacred thread.

The show launched in London on 17 May and runs until 24 July.

Click here to watch a trailer for Call to Holy Ground.

In the words of one of the participants: ‘The work allows mythical and symbolic connections, not only to bring faiths and people together, but also to the local nature in a way that we remember a shared source and a shared humanity’.

Commissioned by Arts and Christianity, supported by Arts Council of England, the Morel Trust, the Lady Peel Trust, the Prince of Wales Charitable Foundation and the London Borough of Waltham Forest.