Becoming One: A Near Death Experience

When Rachel Finch lost blood after the birth of her first child, things began to go wrong. The experience that followed gives us a tantalising glimpse at the other side 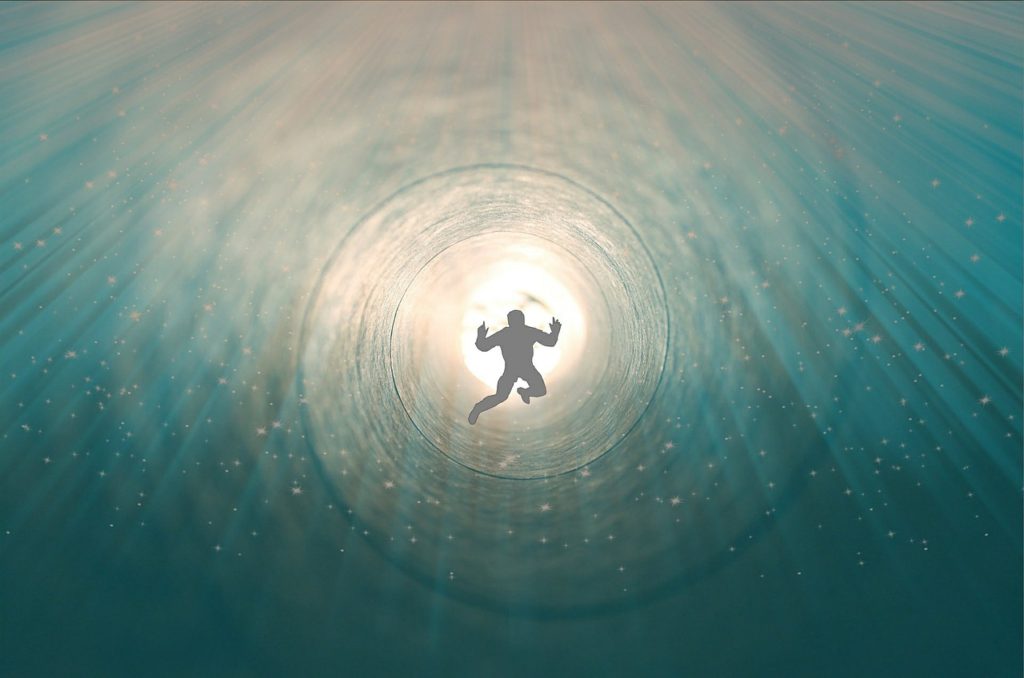 At the age of 20 I gave birth to my first child, a daughter. It was a traumatic birth and I lost an enormous amount of blood. Two days after my baby was born it was decided I required a blood transfusion. What followed from this is ultimately what led to my near death experience, though to this day there is still speculation as to whether the blood I was given was infected, or if I had an allergic reaction to it: my hospital notes are conflicting.

My daughter was born on a Wednesday, and the transfusion began on Friday afternoon. Within two hours of it beginning, I started to feel strange. I remember lying in the ward, looking up at the bag of blood feeding into me and feeling physically sick. I stood to find the toilet, dragging the blood along with me, and stumbled forward. I noted how incredibly weak I felt. By the time I returned to the ward, I had begun to tremor. I assumed I was cold, and lay back down attempting to cover myself with the hospital sheet.

There was another new mother opposite me, who asked if I was okay. I tried to tell her I was just feeling cold, but noticed when trying to talk that my teeth had begun to chatter. I reached for my buzzer to request some blankets. Within seconds of the midwife coming to my call, panic erupted. I was quickly surrounded by a number of nurses and the transfusion was immediately stopped. I was shaking and beginning to fight for breath, totally oblivious to what was actually happening. When they placed an oxygen mask over my face, I noticed my nails turning blue and had a moment of mental clarity: ‘Oh, I’m dying…’ I felt agitated until this realisation swam through me, and I felt I should let go.

I know my next of kin was called. I know I turned my head to gaze at my newborn and felt sad for her, fearful for her. I worked hard to keep my eyes open but they were feeling increasingly heavy, and before long I had closed them and I was up. I floated above my body, momentarily stunned, and then I was flying, shooting up and forward at an unfathomable speed.

I have likened the experience to a tunnel, though this description has never felt one hundred percent right. It felt like an enclosed space, and yet simultaneously wide open and vast. There are many apparent contradictions throughout the experience, where reality here is so misaligned with reality there. I was spinning and tumbling, travelling in a dark space that was absolutely illuminated, and I was not alone: I could feel a presence with me. The rushing feeling of moving at such great speed stayed with me. It was exhilarating.

Before long, I found myself in a new area. Our flight had ceased, and I then found myself in what I can only describe as a room without walls. It felt a secluded area, and yet it was enormous. Still, it was dark, but this in no way made me feel afraid. I remember feeling curious, bewildered, awestruck. I felt complete trust in the presence that I felt alongside me.

A ‘movie’ of sorts began to play: words fail me to explain the sight. It was somewhat like an enormous cinema screen, but holographic, with many dimensions to it, all around me. It played, in black and white, my entire life up to that point. I watched it and simultaneously relived it. Each individual moment, each reliving, widening my understanding immeasurably. I witnessed many events from my childhood, swimming backwards through time, somehow understanding each experience through not just my own interpretation, but through that of all involved at the time.

“Ultimately, it had all been about love”

I witnessed my own out of body travel as a child. I witnessed the abuse I had suffered and repressed. I witnessed the good I had done and each moment I could have done ‘better’. I watched my mistakes and learnt from each reliving. I could feel the very pain I had caused others and all the joy – the joy was enormous and all-encompassing. I was in no way judged, simply coming to my own judgements about where I had lived well, bringing love into physical moments, and where I had left love out of the equation. I could see and feel the love I shared, spreading like wildfire, rippling from one person to the next, and also the pain I had impacted on others, how it sat heavy in their hearts.

I felt a deep sense of gratitude, with a far greater understanding of my life, the purpose of it and all I had gained from the experience. Ultimately, it had all been about love.

Again we were moving, and I was shooting forward until I saw a pinprick of light in the distance. I can’t define if I was travelling towards it or being drawn there, almost as if by magnetic force. What I do know is that there was a deep desire to reach it. The little beam of light grew in size the closer I came to it, until eventually I seemed to burst, to explode, right into it. The feeling was and still is indescribable.

It was every incredible feeling that a person cannot describe. It was an immediate peace – no pain, no fear, no shame. In this moment, I had forgotten what those things were. It was a feeling of love that I had never even imagined to exist before this moment. Enormous love, like I was loved beyond all comprehension, beyond all human understanding. I felt ‘home’. I felt I knew this feeling, this space, but that I had forgotten it. Light filled every space. It was all I could see, feel, hear. I do not recall a form, just light that was brilliant and not at all blinding to look at. I began to merge with the light. I felt I became one with it, until I knew all there was to know.

The Light began to communicate with me, without making a sound. A conversation began, and I was asked if I would like to return – to my body, to Earth. I remember feeling horrified at the suggestion and hearing the response, loud within me: ‘No‘. I was asked again and gave the same response, confused. A third time, I was asked, ‘Do you wish to go back?’ and before I could answer, I was shown scenes from my life – from the life I would live – the daughter I had just birthed, the purpose behind my return, the love I could share. I remember taking what I have titled a ‘soul-sigh’. A deep knowing and understanding washed over me, and I said ‘Yes‘.

I asked for a moment more, and it was granted. I remember soaking love into my being, relishing in this absolute peace and acceptance. It was a feeling I have carried the memory of every day since my return. I was completely at one with all existence.

I found myself shooting backwards. It was cold, far from the Light, and I was grieving for my experience before I’d even returned to my body. It was another two days before I could hold my baby. I lay there, sad, joyful, angry, grateful. The conflicting emotions lasted for years.

This experience was 14 years ago now, and in the time that has followed I have worked hard to make my second chance at life purposeful. I went on to have three more children – my children are austistic and my purpose as their mother is enormous. I started an online community to support trauma survivors through their recovery (you can search for ‘Bruised But Not Broken’ on Facebook) and have published a number of poetry books, one specifically and solely related to my near death experience.

My experience was undoubtedly the most incredible and transformative experience of my life. I have never forgotten a moment of it, and there isn’t a moment of my life I have lived since that has not been touched by the experience. 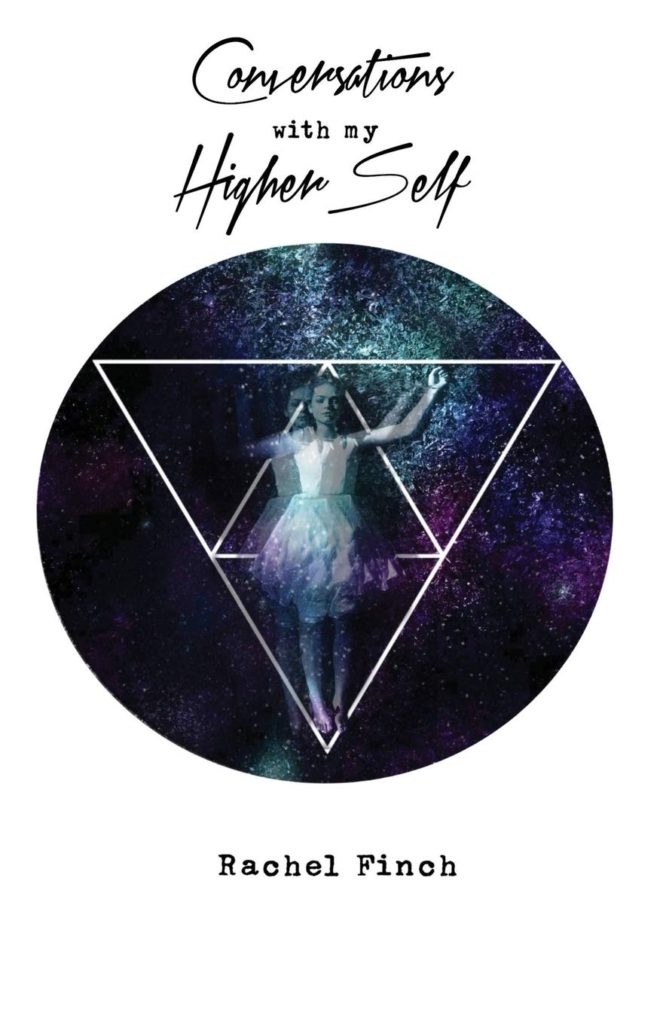 British poet Rachel Finch is the creator of the Bruised But Not Broken community on Facebook, which provides support and healing for trauma survivors. Her second book, Conversations With My Higher Self, recounts Finch’s personal experience with a life-changing near death, out-of-body event following the delivery of her eldest daughter. Written in mesmerising verse, Conversations With My Higher Self is honest, spiritual, and cathartic and Finch gives us a tantalising glimpse of what is on the other side: transformation, light and love.