Behind the Deck: The Pagan Otherworlds Tarot

Uusi  is a Chicago-based studio founded by artists and designers Linnea Gits and Peter Dunham. Inspired by European paganism, the Pagan Otherworlds Tarot is a unique deck blending themes of folklore, nature and art, and even introduces a few new cards along the way. We went straight to the source to have a conversation with founder and artist Linnea Gits so we could find out more about this intriguing deck and its origins. 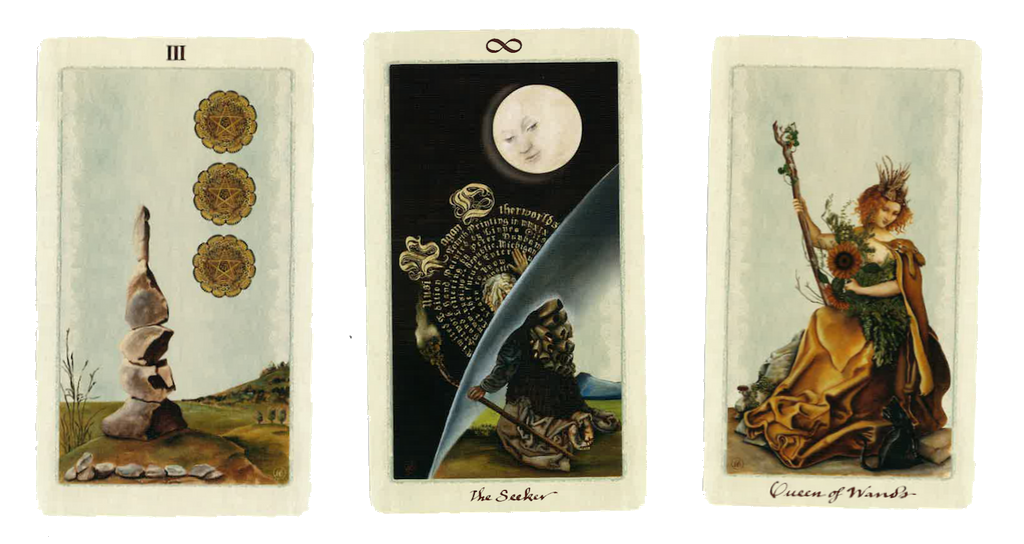 Uusi started out designing and producing playing cards, but you now create tarot, oracle and playing card decks alongside each other. Tarot seems to be welcoming a new generation of fans, so what first inspired you to branch out into the world of tarot?

We think the tarot has definitely reawakened with a new generation. This time around, we feel it has a deep connection with the myth-making process that a younger generation is forming to express and guide their sense of self in the world. This spiritual path is increasingly interwoven with individual identity that informs the day-to-day decisions and movement of our lives. As a daily meditation, the tarot becomes a modern touchstone to release the potentiality of your character as it moves freely and openly among humanity’s archetypes, ancient wisdoms and myth. It’s a place for both the existential questions as well as a momentary contemplation for the day ahead.

How familiar were you with the imagery of tarot before creating your first deck? Did you find Ryder-Waite conventions restrictive at all when creating the Pagan Otherworlds Tarot (PO), or was it a helpful framework?

We were not super familiar with the intricacies of tarot when we first began our work on PO, but we were soon drawn to the Ryder-Waite practice as it had such a comprehensive approach to archetypes and ancient wisdom. We enjoyed the structure the RWS gave our work, but we wanted to feel free to use an intuitive approach as well so that we could bring a fresh look and a modern approach to the deck and its storytelling structure.

One of these approaches was to eliminate people from the minor cards. A lot of folk have seen this as our creating a ‘pip’ deck, but we do not feel that way at all – nor is it what we intended. Each of the cards in the minor arcana were created as landscapes that the reader can enter themselves. Within those landscapes are symbols and groundwork for the mystical content to emerge without the interference of another human form.

Another new element we included in our tarot is the Seeker card. This card was meant as a talisman for the reader to be used within the reading as a personal signifier. Finally, we created five Luna cards to represent the eight distinct phases of the moon (three of the five cards can be read in reverse). This allowed for a gentle, natural timing element to be included in a reading. Both the Seeker card and the Luna cards are unique to our tarots, and we have had such an overwhelmingly positive response to their inclusion.

You mention the Seeker card (middle image in header), which is a really interesting addition to the traditional 22-card Major Arcana that most of us are familiar with. Could you explain a bit more about the card’s background and conception?

This card is based on an old Celtic saying: “Heaven and earth are only three feet apart, but in thin places that distance is even shorter.” We loved the idea of tarot creating that ‘thin place’ (a place where the divine is more accessible) within your mind so that you could access the power and the divine within you. This card represents a type of token that gives you access to that place, and is your calling card for your time there. 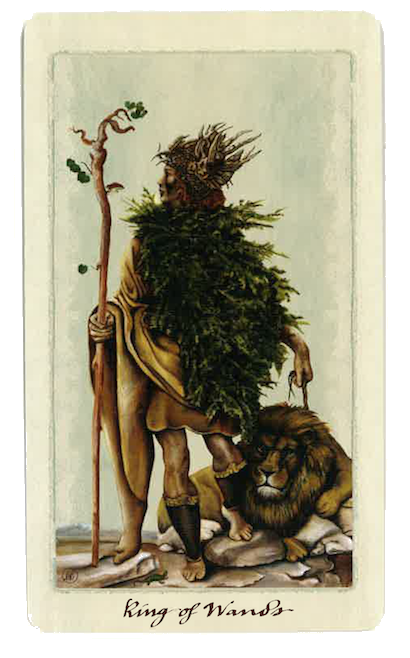 There’s a sense of a deep, vital connection with the natural world in the Pagan Otherworlds. This is especially notable in the Major Arcana, where several figures physically merge with organic elements. What is the deck saying about humans, nature, and the relationship between the two?

I think we are in a time of great uncertainty and fear towards our connection with the planet and all its inhabitants. As wonderful and useful as modern technology and science have been for us, they have also left us stranded in the world, isolated in our individual egos from the once reassuring, communal relationship we had with nature and with each other. With the PO tarot, we wanted to reintegrate our modern selves in that powerful current which flows between us and our natural world so we could once again discover the magnificence in each other, and in this planet that has nurtured us and given rise to the astonishing diversity and complexities of this elegant, glittering universe.

In your opinion, what is the relationship between art and spirituality? Is there a necessary connection?

Definitely necessary! Art is the contained that holds the things about the world that cannot be spoken – only felt. This unspoken feeling is the complex emotion and truth that imbues the intuitive leap our minds take when we relax into something beautiful. It is a portal that takes us over the threshold of reality and penetrates the contradictory expressions in life: beauty and ugliness, refinement and crudeness, good and bad. They’re all qualities that have been attracted and repelled to each other since time began, and have formed the world we know. 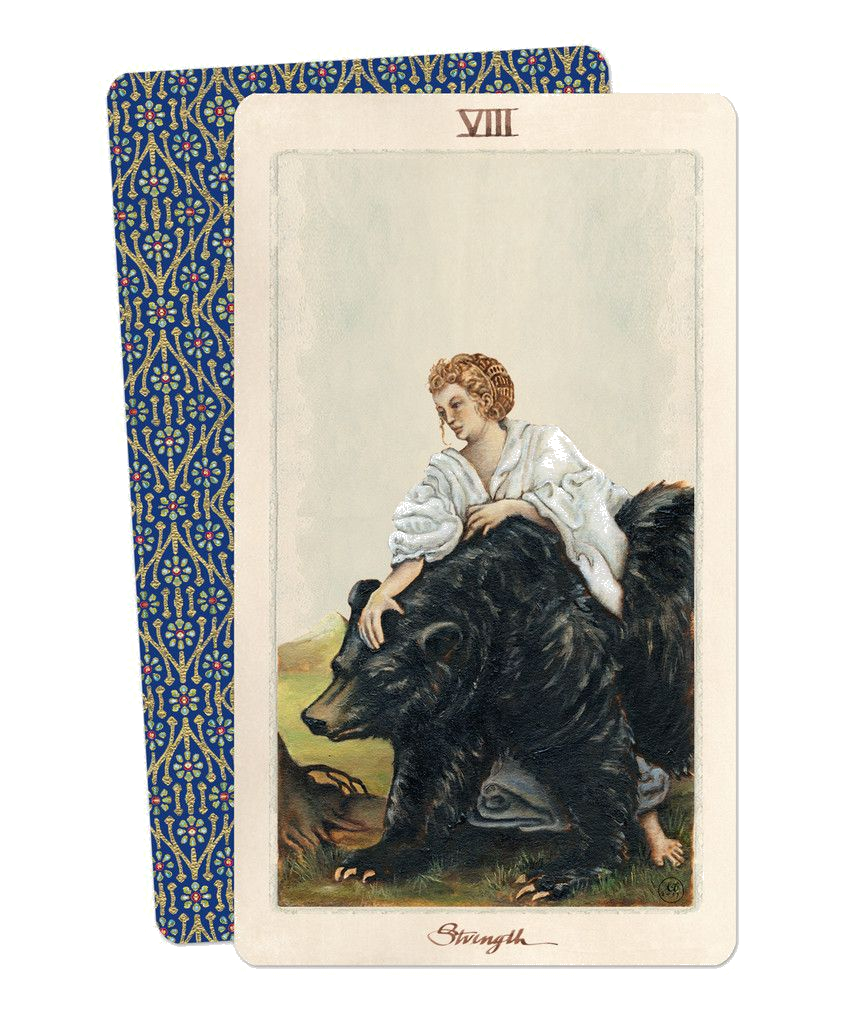 Finally, which card of the Major Arcana has most resonated with you on the creative journey of the Pagan Otherworlds?

For me, the Strength card has been the one I’ve needed to hear from the most, and it is also my favourite painting from the deck. For Peter, it is the King of Wands. 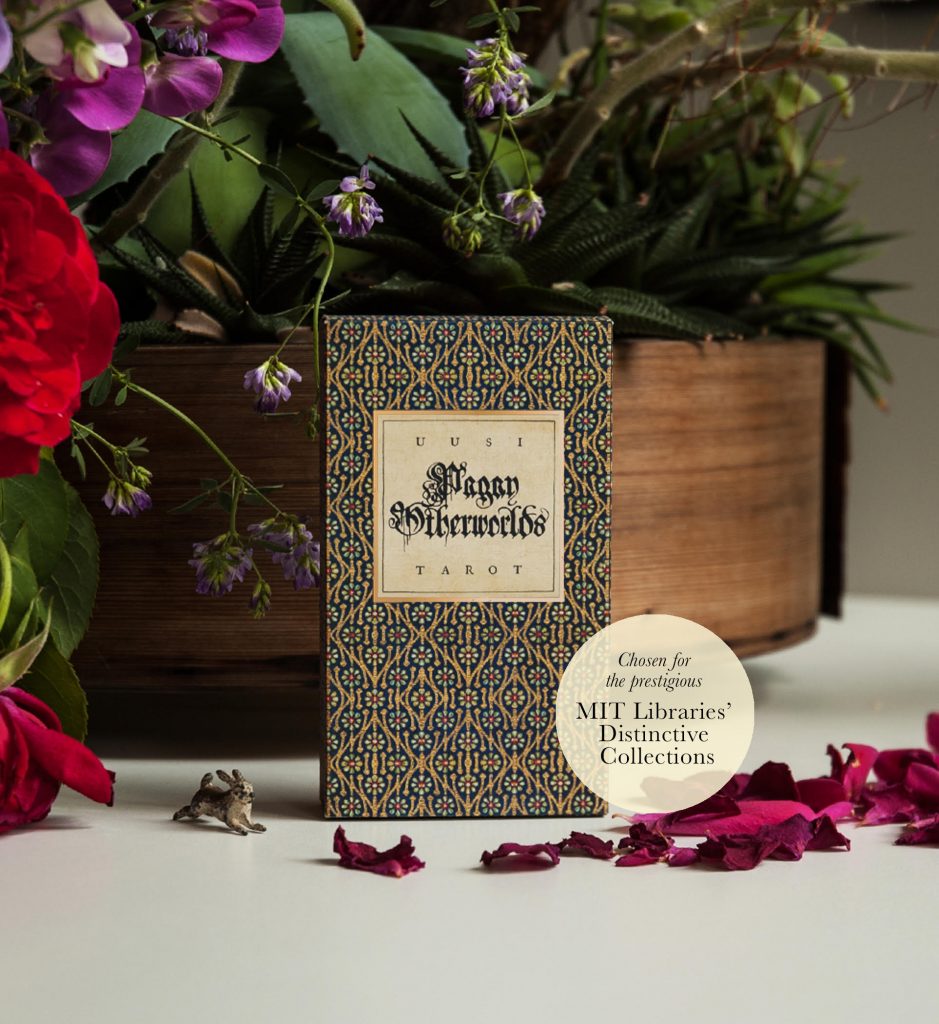 Uusi are designers and artists with a love of traditional craftsmanship, material exploration and a search for the essential beauty in everyday objects. Their passion takes them from limited edition and one-off studio work to multiple production pieces. Under the creative direction of the founders, Peter Dunham and Linnea Gits, the studio looks to bring authenticity and a sense of playfulness to the work they produce for their company and for their clients. All designs at Uusi are produced either in their studio or in collaboration with small, family-owned companies in the USA who share Uusi’s attention to detail and commitment to craft.

About the designers: Peter Dunham and Linnea Gits are established artists working in the field of design. Along with private clients, companies they have worked with include Herman Miller, Design Within Reach, Chronicle Books, Haworth, Sharpie, Draft FCB and Prismacolor. In the fall of 2010 they launched Uusi, based on the idea that life is worth the meaningful effort and its reward is one of discovery.